Advantages and Disadvantages of Python for Product Development

Python is the world’s fastest-growing and most popular programming language not just among software engineers but among data analysts, scientists, mathematicians, accountants, and even kids. No wonder. It’s an extremely user-friendly language. People from different disciplines use Python for a variety of tasks like data analysis and visualization, artificial intelligence and machine learning, testing, and automation — which is, in fact, one of the most common uses of Python. Python is also used to build web, mobile, and desktop applications.

Now if you have some programming experience, you may be wondering: What’s the big deal about Python if you can do all this stuff with other programming languages? Let’s dive deep into the pros and cons of Python to understand what’s driving its popularity.

Why use Python? What are the benefits of Python?

Python is used by big name companies like Google, Instagram, Spotify, Netflix, and Dropbox. Why did these tech leaders choose Python over other programming languages? Here are a few reasons.

Well-structured, straightforward, easy to learn and use, concise yet expressive, versatile, and neat. That’s what Python is. Python focuses on code readability and visibility, which means developers can easily read, understand, and modify existing code and spend less time and effort actually coding. These advantages make Python one of the best languages for startups, since getting to market fast often means a competitive advantage and a faster return on investment.

Python can be used to build almost anything, from websites to AI-powered solutions to numeric and scientific apps. The language provides a lot of standard libraries and features that address almost any programming need, which again results in rapid development.

Security is a priority

Cybersecurity threats are rapidly growing, which is why businesses look for ways to ensure maximum security.

Python proves to be a great choice for those focusing on data security. It provides features for authentication and authorization, email verification, and resetting passwords. Also, Python and its frameworks offer different mechanisms to address and reduce security-related issues such as cross-site request forgery (CSRF), cross-site scripting (XSS), SQL injection, and clickjacking.

Having a strong community is crucial for any language, since community members share experiences and help one another, create and upgrade features, update documentation, and troubleshoot problems. A large community, in short, grows the language and makes it develop faster.

Additionally, a large community means developers are easy to find. For example, there were 2,843 Python/Django outsourcing development companies listed on Clutch as of October 2020. As for Python developers, there were 8.2 million active Pythonistas in the world according to the Global Developer Population 2019 report by SlashData.

Good with AI and ML tasks

How does Amazon choose items just for you? And how does Spotify know what you want to listen to before you actually turn on the music? The answer is machine learning. And Python is the king of machine learning and artificial intelligence. Among its top machine learning use cases are content personalization, recommendations, image recognition, machine translation, speech recognition, fraud detection, and user behavior analytics.

But despite all these great things about Python, it may not be the best choice for your project.

There are times when Python isn’t the best language. There are some specific applications where other languages like C or Java are going to be better. Let’s see why.

Python is an interpreted language, meaning everything you do goes through an extra layer so the target machine can read and execute the code. It’s similar to talking through a translator with someone who speaks a different language.

Comparing Python with C, a compiled programming language, it’s true that Python code runs slower if we measure the execution time. Yet Python’s flexibility serves as a counterweight here. The language offers practical ways to solve problems and features dynamic typing, which contributes to rapid development. So Python beats C in terms of development time, which is often far more crucial than runtime performance, since less development time converts into lower costs and faster time to market.

Conclusion: If you have algorithms that need to run quickly (say, for sorting, searching, or just doing something on an integrated piece of hardware that needs to meet a specific speed requirement), you probably shouldn’t use Python.

Conclusion: Creating Python applications for mobile phones is a pain, which is why Python is rarely used for mobile app development. If you want to build a mobile app, consider using Swift for iOS development and Java or Kotlin for Android development.

3D rendering is computationally heavy. That’s why if you use a relatively slower language like Python for 3D rendering, your rendering isn’t going to be as efficient and fast as most gamers would hope. Also, you can’t use Python with Unity, a popular game development engine.

Conclusion: Graphics require multithreading, motion, and raw machine power, which is why games developed with Python aren’t going to be as fast as you want them to be. We suggest you consider using C++ or C# for games.

Because of Python’s structure, it demands a lot of memory.

Conclusion: Python isn’t your best option if your project is full of memory-intensive tasks and you have tight memory and performance constraints.

FAQ about Python for product development

Now that you know the pros and cons of Python, let’s have a quick look at some other crucial points that will give a better understanding of Python product development.

What are the top companies using Python?

There are quite a lot of world-famous companies that prefer Python to other languages. They include Google, Netflix, Spotify, Uber, Dropbox, Instacart, Instagram, Stripe, Disqus, and Mozilla.

Where is Python used?

How stable is Python?

Very stable. Famous apps written in Python like Pinterest, Disqus, and Instagram prove that. These apps use Python to handle high loads and ensure fast and efficient app performance.

Is the future of Python bright?

Python is on the rise and will continue to grow. See what our Python developers expect from Python in the future.

What are popular Python frameworks?

The two most popular Python web frameworks are Flask and Django. As for data science frameworks and libraries, the leaders are NumPy, Pandas, Matplotlib, SciPy, and SciKit-Learn.

Where can I find and hire a Python company?

You can search for Pythonistas on review platforms like Clutch and GoodFirms, visit development company websites, and ask for references. Study what technology stacks companies use and give test tasks with functionality similar to what’s in your project to see what technical solutions developers can provide. Finally, conduct an interview to see if a company is the right fit for you.

Read our guide on how to find and hire a Python development company to get a complete understanding of how to choose the right software developers for your project.

Thinking about developing software with Python?

We hope this guide has given you a better understanding of the advantages and disadvantages of Python. If you’d like us to answer any questions about Python software development, feel free to ask.

You’re also welcome to check out our Projects page to see the Python apps we’ve created so far.

For more on developing software using Python, we suggest you read the following blog posts: 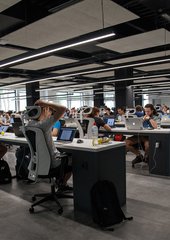 Business
Why Use Python for AI and Machine Learning?
Saving article...